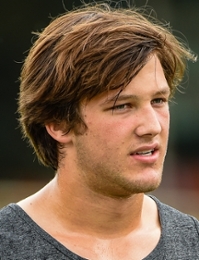 Athlete
B I O
Venables committed to Clemson on June 2.

Played quarterback for nearby Daniel High School but is expected to play safety at Clemson … ranks as the school’s career passing yardage leader with 6,927 yards … totaled 73 touchdown passes and 38 rushing touchdowns in three years as a quarterback … comes to Clemson from the same high school that produced DeAndre Hopkins, Shaq Lawson and Kyle Young, players that became All-Americans at Clemson … will play for South Carolina in the Shrine Bowl on Dec. 21 … son of Clemson defensive coordinator Brent Venables and brother of Clemson linebacker Jake Venables … ranked as the 12th-best player in South Carolina by PrepStar … ranked as the 19th-best overall player in South Carolina by the Charlotte Observer.

Played for Jeff Fruster at Daniel High School in Clemson, S.C. … helped Daniel to an 11-1 record and the third round of the state playoffs as starting quarterback in 2019 … set school record for passing yards in a season with 3,281 completed 253-of-374 passes, a 67.6 completion percentage, on the year … posted four straight 300-yard passing games at three straight five-touchdown games at various points … completed 26-of-43 passes for 426 yards and six touchdowns vs. Walhalla … recorded 48 combined touchdowns rushing and passing … was also starter on defense, contributing 75 tackles, seven tackles for loss and four interceptions in 2019 … named all-state as a defensive back in 2019 … named Offensive Player of the Year for the region and was a first-team all-region honoree … Mr. Football nominee in the state of South Carolina … first-team all-region and was Player of the Year for the area in 2018 as a junior … second-team USA Today All-State selection that year … threw for 3,006 yards and rushed for 890 as a junior when he helped Daniel to an 11-2 record … completed 243-for-364 passes that year with 26 touchdown passes and just four interceptions … added 163 rushes for 890 yards and 28 rushing touchdowns to finish with 54 combined touchdowns rushing and passing … recorded 23 carries for 218 yards and five rushing touchdowns and threw for 234 and another touchdown in a 50-49 win over South Pointe to end South Pointe’s bid for a fifth straight title … as a sophomore in 2017, threw for 640 yards and rushed for 198 and four touchdowns.

Committed to Clemson on June 2, 2019 … son of Clemson defensive coordinator Brent Venables and brother of Clemson redshirt sophomore linebacker Jake Venables … signed with Clemson on December 18, his dad’s birthday … his father played college football at Kansas State and is one of the top assistant coaches in the country who won the Broyles Award in 2016 … his brother is a top reserve linebacker on 2019 team … recruited to Clemson Brent Venables and Mickey Conn … wore No. 24 at Daniel … expected to enroll at Clemson in January 2020.