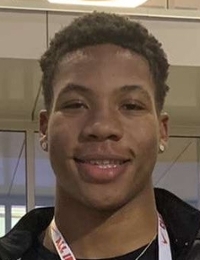 Linebacker
B I O
Three-time all-state selection … three-time All-Metro and All-Capital City Conference (CCC) honoree … 2021 CCC Defensive Player of the Year … 2021 Alabama Sports Writers Association Class 3A Lineman of the Year and earned “Super All-State” honors presented to the top 12 players in the state regardless of position or classification. … credited with 381 tackles (59 for loss), 10.5 sacks, seven interceptions, seven pass breakups and seven touchdowns in his prep career … selected to the Alabama-Mississippi All-Star Classic … coached by Kirk Johnson at Montgomery Catholic Preparatory … along with fellow Clemson 2022 signee Kylon Griffin, led a defense that gave up just 43 points in 14 games and reached the state semifinals in 2021 … consensus four-star prospect … rated by Rivals.com as the nation’s No. 147 overall player, as the country’s 10th-best linebacker and as the seventh-ranked prospect in the state of Alabama … PrepStar placed him as No. 168 among its national Top 300 … ESPN.com ranked him as the nation’s 10th-best linebacker and the 14th-best overall player in the state of Alabama … rated by 247Sports as the 13th-best player in Alabama … also played basketball at Montgomery Catholic, helping his team to a state title game appearance in 2021 … plays the piano … committed to Clemson on National Signing Day, Feb. 2, 2022 … plans to enroll in the summer of 2022 … born Dec. 22, 2003.