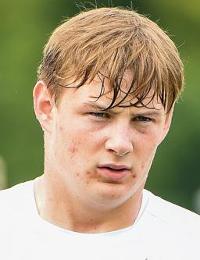 Tight End
B I O
Clemson offered on 6/5/19 while attending Dabo Swinney camp.

All-around athlete who looks to play tight end for the Tigers but had experience at defensive end, quarterback and tight end during his career … started at quarterback as a sophomore … scored nine touchdowns on just 23 carries as a goal line Wildcat back as a junior in 2018 … recorded 113 receptions for 1,783 yards and 17 touchdowns over his career as a tight end … scored at least one touchdown of at least 50 yards in each of his three seasons playing the position … rushed for 13 touchdowns, giving him 30 total rushing and receiving touchdowns for his career.

Committed to Clemson on June 17, 2019 … wore No. 10 in high school … recruited to Clemson by Jeff Scott and Danny Pearman … last name pronounced ENN-iss … expected to enroll at Clemson in January 2020.