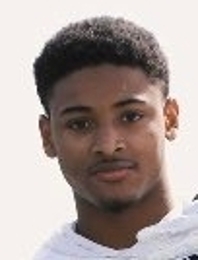 Cornerback
B I O
Ranked as a four-star recruit by all major services … ranked as the No. 75 overall player in the nation by 247Sports, which also had him as the sixth-best cornerback in the nation and the ninth-best overall player in Georgia … ranked No. 149 overall by Rivals.com, the 12th-best cornerback in the nation and 13th-best player in talent-rich Georgia … ESPN.com ranked him No. 225 overall, as well as the 15th-best cornerback and 25th-best player in Georgia … In the first nine games he played at Westlake High School in Atlanta in 2020 he was very productive on offense despite limited appearances on that side of the ball…had a 71-yard rush for a touchdown, had one kickoff return for 75 yards and had 11 receptions for 323 yards and four touchdowns…averaging 29.4 yards per reception…played at Grady High School in 2018 and 2019…also played basketball at Grady…had 18 receptions for 262 yards and two scores in 2018… selected for All-American Bowl … had two career interception returns for touchdowns, including one of 100 yards … plans to enroll at Clemson in January 2021 … committed to Clemson on Dec. 12, 2020 after originally committing to LSU prior to the 2020 season … recruited by Mike Reed … played for Bobby May at Westlake High School, the same high school that produced former Clemson cornerback and 2020 first-round pick A.J. Terrell and fellow 2021 signee Dacari Collins … born Aug. 28, 2003.