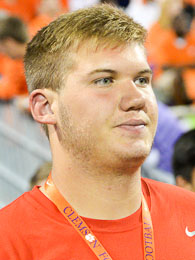 Offensive Tackle
B I O
Played in Army All-American game…first-team MaxPrep All-American and USA Today…also made first-team by MaxPrep as a junior…unanimous 5-Star prospect and highest ranked Clemson player in the class…actually named a five-star before his junior year…nephew of former Clemson All-ACC defensive tackle Dan Benish, a starter on Clemson’s 1981 National Championship team….a consensus top 25 player in the nation at the conclusion of the 2014 season, he is ranked No. 8 nationally by Scout.com, No. 13 by 247 Sports, No. 16 by ESPN.com and No. 16 by Rivals.com…listed as No. 2 offensive tackle in the nation by ESPN.com, Rivals.com, 247 Sports and Scout.com…ranked as second best player in the state of Georgia by ESPN.com and third best in the Peach State by Rivals...helped his North Gwinnett team to a 13-2 record and state championship game appearance as a junior…participated in The Opening in Oregon in summer of 2014…recruited by Tony Elliott…committed to Clemson on February 5, 2014…signed financial aid agreement with Clemson on August 1, 2014… enrolled at Clemson on Jan. 7, 2015.

Mickey Plyler on Hyatt: It is rare to see offensive linemen play as true freshmen but Hyatt is a rare talent. He has everything you can look for in an offensive lineman. He has great feet and quickness. Hyatt is polished in his technique. There are few offensive linemen that arrive with this type of skill set.

He was a three-year starter at North Gwinnett. Visited for the Orange and White game on 4/13/13. He has tremendous balance and flexibility to play with leverage in the run game. He takes good angles when blocking and has excellent hand-eye coordination. He uses his hands well on defenders and very light on his feet that can get do well on screens and second level plays. Hyatt will be able to play early in his career. He has the physical and mental approach to be a star at Clemson. He is the nephew of former Clemson star Dan Benish.