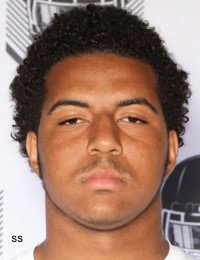 Offensive Line
B I O
One of the top offensive linemen in Broward Country, Florida, who helped Fort Lauderdale High to breakout 2018 season as athletic offensive tackle … had 49 knockdown blocks to lead the offensive line … team finished with a 9-3 record, most wins for the program since 1974 … two of the three losses were to St. Thomas Aquinas, one of the top 10 teams in the nation according the USA Today … had 38 offers before selecting Clemson … made first-team All-Broward County in 2018 after starting every game … strong candidate for all-state, which had not been released at the time of his signing … ranked as the No. 3 offensive lineman in Broward County entering 2018 … ranked as No. 67 offensive tackle in the nation by Rivals.com and No. 64 at his position by ESPN.com … in 2017, had 38 pancake blocks to lead the team … second-team All-Broward County … had 18 pancake blocks as a sophomore for the Flying L’s … played four years and started on the offensive line three years … has 80-inch wingspan … recruited by Brent Venables … played at Fort Lauderdale High for Richard Dunbar … committed to Clemson on signing day, Dec. 19, 2018 … plans to enroll at Clemson in January 2019 … last name pronounced “boat-ing.”