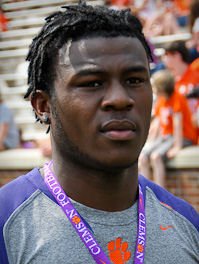 Running Back
B I O
He rushed for 600 yards and caught passes for another 300 with 15 total touchdowns last season. Attended Clemson's junior day in March. #39 rated player and 4 star recruit based on the 2012 AthleteVault NC/SC Rankings. Has a 4.35 shuttle and 32 in vertical. He committed to Clemson on 8-4-2011.

He could be used at a number of positions at the next level with TE or H-back position being the main ones. He could also beef up and be a DE but wants to stick to the offensive side. One of the most impressive physical specimens in the state this year.