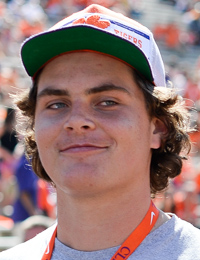 Offensive Tackle
B I O
Played in the Army All-American game…played tackle in high school, but played center and guard in Army All-American game…among the top 100 players in the nation by 247 Sports (73), Rivals.com (89) and ESPN.com (93)…No. 7 offensive tackle in the nation by ESPN, No. 8 by Rivals.com and #15 by 247 Sports…No.18 overall player in Florida by ESPN and Rivals.com…narrowed his decision to Clemson and Florida…recruited by Tony Elliott…helped Plant to an 11-2-1 season in 2013...his father, John, played football at Alabama and for the Miami Dolphins in the NFL…committed to Clemson on April 10, 2014…signed financial aid agreement with Clemson on August 1, 2014…enrolled at Clemson on Jan.7, 2015

Mickey Plyler on Fruhmorgen: Fruhmorgen is terrific offensive line prospect with a great background. His father played in the NFL and his grandfather is a high school coach. This is a top 100 player for a reason. Fruhmorgen is a huge kid that has a huge ceiling. He is another rarity in that he may play as a true freshman on the offensive line.