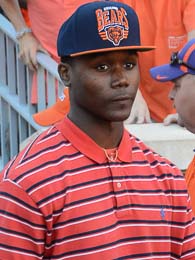 Defensive Back
B I O
As a junior, he had 50 tackles and 4 intereceptions with 10 pass break ups. He also had 43 passes for 778 yards and eight touchdowns. He missed the majority of his sophomore season with an injury. He was offered by Clemson on Feb. 16th, 2012. He took in the junior day on Jan 28th, 2012. His recruiter of record is Marion Hobby. He plans to enroll at Clemson in January 2012.

Clemson likes him at corner and safety because of his size. He will have a chance to avoid a redshirt season in 2013. He looked really athletic at the Dabo Swinney football camp in 2012.

After a long day berating anything other than CU basketball