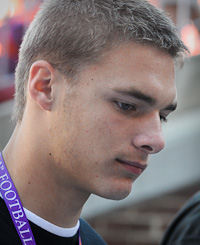 Quarterback
B I O
Stoudt is 100% again after breaking his leg in the seventh week of his junior season. At the time of the injury he had thrown for 1,151 yards and 16 TDs with only one interception. Stoudt wasn't able to put weight on the leg until Christmas and wasn't able to run until the end of January. Son of former NFL QB Cliff Stoudt. His team finished the season with a 8-3 record. The last game was a 28-14 loss at Westerville South. His season stats were 163-250 for 2159 yards with 22 touchdowns and 6 interceptions in 11 games.