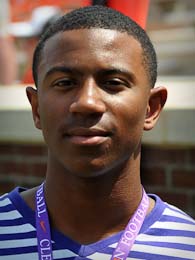 He has track speed at the running back position. He prefers to play RB at the college level.