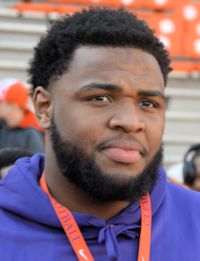 Mickey Plyler on Wilkins: "This might be the best prospect in the class. It is so rare to see a massive man of this size move the way Wilkins moves. God just doesn't make too many like this talent. You just don't see this kind of quick burst and athleticism from me this size. The only players who you can compare him to are guys in the NFL. It says a lot about Clemson and Brent Venables to be able to go into the Northeast and get this type of prospect."

As a senior, he had 71 tackles, 4 forced fumbles, 22 tackles for loss and 8 sacks. Wilkins was impressive in the Under Armour All-American game with four tackles, two tackles for loss, a sack, and a blocked PAT that he returned for a touchdown.