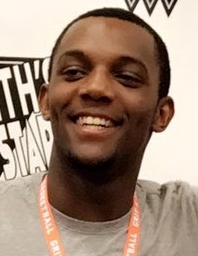 Forward
B I O
Four-star prospect according to 247 Sports, ESPN, Rivals and Scout ... rated as high as the No. 89 prospect in the nation by Rivals ... also No. 104 by Scout and No. 107 by 247 Sports ... No. 3 prospect from the state of Virginia by ESPN and No. 7 by Rivals ... No. 27 prospect at the power forward spot by ESPN ... Central Virginia Boys Player of the Year as a senior, when he led Blue Ridge to a second state championship in three years ... averaged 13.0 points and 9.4 rebounds per game as a senior ... first-team All-VISAA Division II selection, he was a second-team choice as a junior ... also second-team all-state by USA Today as a senior ... posted 16 points, six rebounds and three blocks in championship game ... notched double-double and produced 14 of his 18 points in the second half of semifinal win over Virginia Episcopal School ... team MVP as a senior when he went over 1,000 career points in three seasons ... MVP of the Bullis Holiday Classic and Joe Miller Invitational ... posted 18 points in the championship game against Word of God ... MVP of the Central Virginia All-Star Game, when he tallied 16 points ... played freshman year at Fluvanna County High School, where he scored 377 points ... coached by Cade Lemcke at Blue Ridge, helping team to a 75-10 record in three seasons.

“Aamir is a strong power forward who has a very good skill level for his size,” Brownell said. “He has excellent hands, and as a result, is a great rebounder. He has a good feel for the game, loves to compete, and should have the opportunity to play early in his career because of his size, physical ability and toughness.”