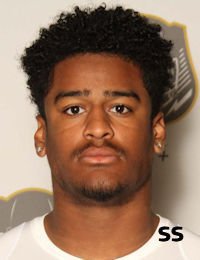 Defensive End
B I O
Rated the No. 135 overall prospect, No. 4 player in the state of Virginia and No. 4 outside linebacker in the nation by Rivals … played in the US Army All-American game ... rated the No. 176 prospect by 247 Sports ... No. 5 in the state and No. 13 at his position as well ... No. 254 nationally and No. 8 in the state by ESPN ... No. 5 prospect in the region by Scout … helped Cox High School and coach Bill Stachelski to a 9-3 record and state playoff berth in 2016 ... had 50 tackles, including 17 for loss, three pass defended, two caused fumbles and three fumble recoveries as a senior ... also had a touchdown on a recovery ... first-team allstate at the highest level of high school football in Virginia ... as a junior, had 39 tackles, including 12.5 for loss, including five sacks ... had two interceptions, seven passes broken up, one caused fumble and two fumble recoveries ... wore #59 at Cox High School ... recruited by Brent Venables.

Mickey Plyler on Jordan Williams: Clemson loves their defensive ends to be ready made. This is exactly what Williams brings. He looks like Clelin Ferrell, Austin Bryant, Shaq Lawson, Xavier Kelly. he has a great frame. Williams won't have to change his body to compete. I would be surprised if he is red-shirted if he stays healthy.

As a junior, he had 39 tackles, 13 tackles for loss, five sacks, two interceptions, seven pass deflections, a forced fumble and recovered two fumbles including one returned for a touchdown.