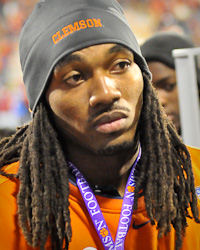 Defensive Back
B I O
As a junior, Davis had 42 tackles and three interceptions. Also three touchdowns passes. Teammate of Clemson commitment running back Marlin Lane. Grew up a Florida State fan. His team finished the season with a 5-6 record. The last game was a 29-28 loss at Orange Park. His season stats were 33 receptions for 493 yards and 5 tds in 11 games. He also had 6 tackles, 3 PBU, and an interception.

Tall for a defensive back so most assume he will play safety at the next level, but he has the cover skills and speed to play defensive back.