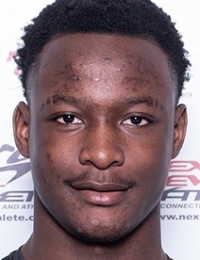 Safety
B I O
Ranked as No. 152 overall player in the nation by ESPN.com, which also ranked him as the fifth-best safety in the nation … ranked No. 205 and as the 14th-best safety by 247Sports … four-star player according to ESPN.com and 247Sports … won District Offensive Player of the Year as a senior … had 27 receptions for 427 yards and six scores … added 20 carries for 173 yards and two scores … on defense, had 60 tackles, six interceptions and four caused fumbles … in the state quarterfinals he had two interceptions on defense and also scored on a diving 19-yard catch on offense … District 12-5A Newcomer of the Year in Texas in 2019 … had 32 receptions for 635 yards and 12 touchdowns on offense … added 80 tackles, five interceptions and three forced fumbles on defense … had two touchdowns on kick returns as well … All-State as a receiver that year … plans to enroll at Clemson in January 2021 … committed to Clemson on Sept. 1, 2020 … recruited by Mickey Conn and Brent Venables … played for Jahmal Fenner at Lyndon B. Johnson High School … born Dec. 7, 2002.