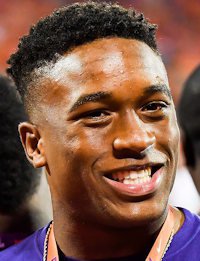 Wide Receiver
B I O
Played in the Under Armour All-American Game in Orlando, Fla. … national top-100 prospect by ESPN, which rated him No. 72 overall ... No. 4 in the state of Tennessee and No. 12 at his position by ESPN ... rated No. 104 by 247 Sports, seventh in the state and No. 15 at the wide receiver position ... namedMr. Football at the AAAA level in the state of Tennessee each of the last two years ... for his career, had 3,498 receiving yards and 47 touchdowns ... averaged 31 yards per reception as a senior when he had 40 catches for 1,238 yards and 18 scores ... played for Steve Mathews at Knoxville Catholic ... big play performer, he had 10 catches of 50 yards or more as a senior ... scored a touchdown on the team’s first possession of the game on either a scrimmage play or return six times as a senior … had seven 100-yard receiving games, including two with at least 200 yards as a senior ... had best game as a senior on his birthday, when he had eight catches for 251 yards and four scores ... the touchdown catches were 52, 35, 82 and 12 yards ... team finished 10-2 and reached second round of playoffs ... as a junior, had 61 receptions for 1,570 yards and 23 touchdowns, a 25.7- yard average per catch ... also had three rushing touchdowns, two on punt returns, two on kickoff returns and one on an interception return for 31 total touchdowns ... gained 2,511 all-purpose yards as a junior ... also had 38 tackles on defense as a cornerback ... had a 93-yard punt return for a score as junior ... team finished with 11-3 record ... as a sophomore, had 25 catches for 407 yards and six sores ... ran the ball more that year, he was the team’s top rusher with 93 carries for 725 yards and nine scores ... had an 87-yard run on offense and 47 yard pick-six on defense ... committed to Clemson and assistant coach Jeff Scott on Valentine’s Day 2016 ... son of former Tennessee quarterback Tee Martin, who led the Vols to the 1998 National Championship ... Martin is now an assistant coach at Southern California ... from same area as fellow signee Tee Higgins ... wore #3 in high school ... recruited by Jeff Scott and Dan Brooks

Mickey Plyler on Rodgers: This is a special young man. He is short and his body looks more like a running back, but Rodgers is special. He is exactly what Clemson was looking for in replacing Artavis Scott. Rodgers has explosive bursts in space. He catches the ball well and even though he is short, he jumps through the roof and high points the football. On top of all that, he is a natural leader. He has that high character intangibles that Artavis brought to the table.