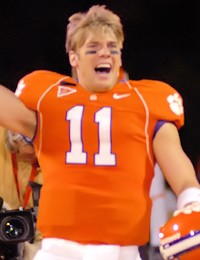 Quarterback
B I O
Overview: Clemson's third-team quarterback in 2006...listed third on the depth chart entering the fall after having a solid spring...was 3-3 for 46 yards in the spring game...completed 12-18 for 122 yards overall in the spring...had a 70-yard run in a spring scrimmage...in his fourth year at Clemson...a solid student who is on track to graduate in May of 2008...native of Mountain Brook, AL where he was MVP of the Alabama-Mississippi High School All-Star game; he completed 12-15 passes for 156 yards and two touchdowns...a strong student at Clemson who has been on the academic honor roll many times...member of the Latin Honor Society in high school...sports editor of his high school yearbook.

Before Clemson: The #15 dual-threat quarterback in the nation according to Rivals.com...MVP of the Alabama-Mississippi All-Star game in 2004; he was 12-15 passing for 156 yards and two scores...passed for 2,390 yards and 24 touchdowns as a senior...threw four interceptions, completed 69 percent of his passes, and rushed for 690 yards with four scores as a senior...set the school single-season record for passing yards as a senior...two-time area player-of-the-week...all-state and all-metro as a senior...received the Champions Unlimited High School Quarterback-of-the-Year Award...along with others in this class, he was the first Tiger signee from Alabama since 1989 (Steve Derriso)...helped his basketball team to the elite eight as a junior...academic all-state, and a member of the National Honor Society and Latin Honor Society...had a 3.75 career GPA...president of the school's Future Business Leaders of America...sports and business editor of his high school yearbook...coached by Joey Jones...chose Clemson over Louisiana State, Michigan State, Mississippi, N.C. State, and Notre Dame...born Herbert Tribble Reese on Jul. 27, 1985...majoring in marketing.

There is nothing wrong in Clemson