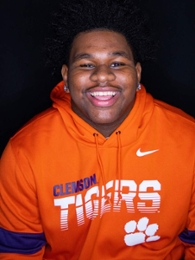 Defensive Line
B I O
Overview: Selected to participate in the Under Armour All-America Game on Jan. 2, 2020 in Orlando, Fla. … participated in The Opening in Frisco, Texas in the summer of 2019 … helped St. John’s College High School go 9-1 in 2018 and rank 20th in the nation (second in the Washington, D.C. area) by MaxPreps … qualified for The Opening national camp last summer and made final top 10 of the lineman event.


In High School: Played 2018 and 2019 seasons for Joe Casamento at St. John’s College High in Washington, D.C. … named to the MaxPrep Junior All-American team after the 2018 season … was a MaxPreps first-team preseason All-American for 2019 … helped team to 9-1 record in 2018 and top-20 national rank as a starting defensive tackle.