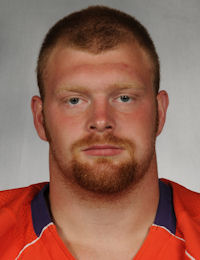 Offensive Line
B I O
Overview: Reserve guard has lettered each of the last two years...suffered a torn ACL in spring practice on Mar. 31, so he will be out until at least November...his loss will certainly hurt Clemson's depth, as he would have seen considerable action...tied for fourth on the team in the bench press with a 425-pound lift.

2009: Played in eight of the 14 games for 94 snaps...had seven knockdown blocks, including three in the win over Coastal Carolina...had two in 25 plays against Boston College...played 20 snaps against Middle Tennessee and 25 against Boston College...had season-best grade of 83 percent against N.C. State...had 78 percent grade in win over Virginia.

Before Clemson: Rated as the #71 offensive guard in the nation by Scout.com...#39 offensive guard in the nation by Rivals.com...#17 player in South Carolina by Rivals.com...all-region at Pickens High by PrepStar as a senior...#24 player in the state by SuperPrep...Shrine Bowl pick and chosen as team captain...all-state as a senior by Rivals.com...played in the Max Emfinger All-American Bowl game...all-region and all-county as a junior and senior...team captain as a senior...had over 100 knockdowns as a junior and senior...lettered three times in track; he threw the shot put and discus...recruited by Brad Scott...chose Clemson over Maryland, North Carolina, N.C. State, and South Carolina...born Feb. 13, 1989...majoring in park & protected area management.