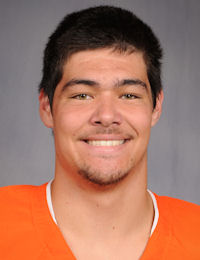 Long Snapper
B I O
Overview: One of the reasons Clemson had an outstanding special teams season in 2009...had 139 snaps and very few were off target all year...recipient of the team Academic Award among freshmen...named to ACC Academic Honor Roll in 2008-09 and 2009-10...attended Bolles School in Jacksonville, FL, the same school that produced former Tiger All-America placekicker David Treadwell; also the same school that produced former Wake Forest quarterback Riley Skinner, but Matt is no relation to Riley...first Tiger to receive a scholarship out of high school as a long snapper.

2009: Clemson's special teams player-of-the-week according to Tiger coaches for the Florida State game...had four tackles in the 14 games on punt coverage, including one in the Music City Bowl against Kentucky...a big reason Richard Jackson was 26th in the nation in field goals per game...snapped the ball 31 times on field goals, 50 times on extra points and 58 times on punts.

Before Clemson: First-team all-state selection...#44 offensive tackle in the nation by ESPN.com...played in the FACA Florida North-South All-Star game...played on the state championship team as a junior...started at offensive tackle, but he was recruited primarily as a long snapper...Super 24 player in Northeast Florida...first-team all-area selection by Florida Times-Union...coached by Corky Rogers...from the same school that produced Tiger All-America placekicker David Treadwell (1985-87)...National Honor Society member...recruited by Dabo Swinney and Billy Napier...chose Clemson over Wake Forest...born Sept. 14, 1989...majoring in pre-business.