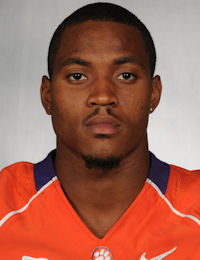 Safety
B I O
Original walk-on who has eight tackles in 23 games in his career...a safety by trade, but has seen most of his game action on special teams.

2009: Played in seven games, including four in a row early in the season when he saw action against Boston College, TCU, Maryland, and Wake Forest...suffered a neck injury against Wake Forest that forced him to miss three games...came back to play against N.C. State and Virginia, and in the ACC Championship game versus Georgia Tech.

2008: Earned a letter as a reserve safety...played four games on special teams and had two tackles, both against The Citadel...also played against S.C. State, Maryland, and Duke.

Before Clemson: Three-year letterman at Calhoun County High School in Saint Matthews, SC, where he was coached by Tommy Brown...played wide receiver and defensive back during his high school career and earned all-region and all-area honors...led his team to the state championship game as a senior...lettered twice in basketball, including one year on the state championship team, and also ran track at Calhoun County High.