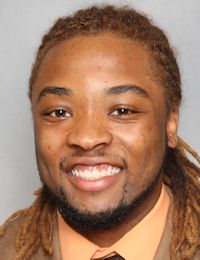 Safety
B I O
Member of the Virginia Tech football squad before transferring to Clemson ... saw most of his action on special teams ... had six tackles and one pass breakup in 31 snaps over 18 games in his career.

2012: Played six games (all on special teams) ... played on special teams in his first career game against Ball State on Sept. 8 ... suffered a broken leg in practice on Oct. 23 and was lost for the rest of the season.

Before Clemson: Red-shirted at Virginia Tech in 2009 as a cornerback under Head Coach Frank Beamer ... #30 cornerback in the nation by ESPN.com out of Daniel High School ... #36 cornerback in the nation and #14 player in South Carolina by Rivals.com ... #19 player in South Carolina by SuperPrep ... #74 cornerback in the nation by Scout.com ... member of SuperPrep's Mid-Atlantic team ... All-Atlantic region by PrepStars ... first-team All-Mountain Lakes by The Daily Journal ... had 10 pass breakups and three interceptions as a senior ... had 312 yards and one touchdown on 12 kickoff returns ... had 175 yards and one touchdown on 11 punt returns ... honorable mention all-state by The State ... sealed South Carolina's win in the Shrine Bowl with a 59-yard interception return for a touchdown ... had 70 tackles as a junior ... had four interceptions and one touchdown as a junior ... returned three kickoffs for touchdowns as a junior ... teamed up with former Tiger wideout DeAndre Hopkins (2010-12) to form a stellar secondary at Daniel High School ... coached by Randy Robinson at Daniel High.