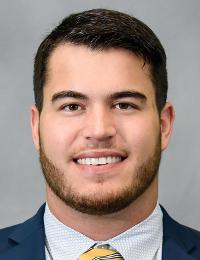 Tight End
B I O

Transferred from Georgia Southern to walk-on at Clemson.2019: Played 84 snaps in eight games prior to bowl season … made Clemson debut vs. Georgia Tech … also saw action vs. Charlotte and vs. Florida State … recorded his first reception at Clemson on a five-yard catch vs. Boston College … played vs. Wofford and Wake Forest … saw action vs. No. 22 Virginia in ACC Championship Game.

Before Clemson: Played 49 snaps in 10 games as a tight end at Georgia Southern in 2016 … redshirted at Georgia Southern in 2015 … lettered at North Oconee High School, where he earned all-region honors as a defensive end as a sophomore and junior and tight end as a senior … first-team All-Northeast Georgia as a junior and senior … played baseball at North Oconee High School.