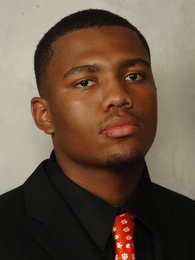 Tight End
B I O
Senior who was not only a reserve defensive tackle most of his career, but also a reserve tight end in 2014 ... had 66 tackles, two tackles for loss and four quarterback pressures in 348 snaps on defense over 29 games in his career ... one of only two active players to earn a letter on both sides of the ball.

Before Clemson: Led Northwestern High School to a perfect season and the state championship as a senior ... had 98 tackles, 15 tackles for loss, seven sacks, seven pass breakups and two caused fumbles as a senior ... No. 31 defensive end in the nation by ESPN ... No. 49 defensive end in the nation and No. 23 player in South Carolina by Rivals.com ... coached by Jimmy Wallace at Northwestern High ... recruited by Jeff Scott.