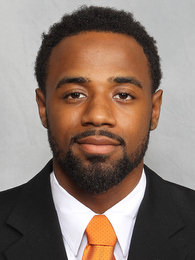 Wide Receiver
B I O
Enrolled at Clemson in January and will participate in spring practice in 2014.

Before Clemson: Played in 2014 U.S. Army All-American game and had a 51-yard reception...ranked among the top 200 players in the nation by the four major recruiting services...one of four signees in this year's class who can make that claim...ranked #121 nationally by Rivals.com, #162 by 247Sports.com, #167 by ESPN.com and #187 by Scout.com...ranked as 16th best wide receiver in the nation by Rivals.com...listed as the ninth best player in the state of Georgia by Rivals.com, 11th by Max Preps, and 13th by 247Sports.com...a four-star receiver by all services...rated as the top wide receiver in Georgia by Atlanta Journal Constitution...a three-year starter at Sandy Creek High School...helped his team to 4A State Championship in 2012, and to 11-1-1 record in 2013...had 42 receptions for 641 yards and 10 scores as a sophomore...had 68 catches for 1,151 yards and 11 touchdowns as a junior...finished senior year with 48 catches for 861 yards and seven scores as a senior...averaged career best 18 yards a catch as a senior...in his final three years, had 158 receptions for 2,663 yards and 28 scores...also a good punt returner, had 306 career punt return yards and a 16.1 average per return... graduate of same high school as current Detroit Lions All-Pro and former Georgia Tech receiver Calvin Johnson...recruited by Jeff Scott...also had offers from Georgia, Auburn, Florida State, Tennessee and Florida...Kitt wore #8 for Sandy Creek High School where he played for Chip Walker.