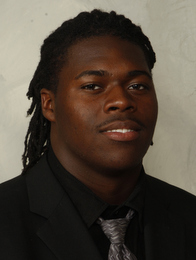 Before Clemson: Had 106 tackles, 26 tackles for loss, seven sacks, 22 quarterback pressures, three pass breakups, one interception and three recovered fumbles as a senior at Daniel High School ... from the same school as 2010 First-Team All-ACC defensive tackle Jarvis Jenkins; Williams wore the same No. 99 jersey that Jenkins wore at Daniel High and Clemson ... helped his team to the state playoffs; had seven tackles, two recovered fumbles and a blocked extra point against South Pointe High School in his final game ... helped Daniel High to a 13-1 record as a starter as both a sophomore and junior ... moved into the starting lineup halfway through his freshman season ... No. 17 player in South Carolina by SuperPrep ... No. 37 defensive tackle in the nation by ESPN ... area defensive player-of-the-year by Seneca Journal ... third in the state in the shotput as a junior ... coached by Randy Robinson at Daniel High ... recruited by Brad Scott.