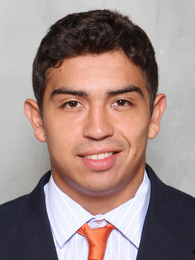 Wide Receiver
B I O
Original walk-on wide receiver who attended Clemson on the GI Bill ... decorated war hero who served approximately 18 months (starting Jan. 26, 2007) in Iraq and one year in Afghanistan ... served in the Army from 2006-10 ... achieved the military rank of Sergeant ... involved in Battle of Kamdesh in Afghanistan on Oct. 3, 2009, when 300 Taliban insurgents battled with 38 U.S. troops; eight Americans lost their lives and 22 were injured, including Rodriguez, in one of the most violent battles in the war; earned a Purple Heart and the Bronze Star Medal With Valor Device for his heroism at Kamdesh ... his story was featured on many national shows and programs ... had 11 receptions for 39 yards and one touchdown, a five-yard carry and six punt returns for 57 yards in 188 snaps over 39 games (one start) in his career ... saw most of his action on special teams.

2013: Semifinalist for the Armed Forces Merit Award ... All-ACC Academic selection ... ACC Academic Honor Roll member ... had seven receptions for 20 yards and one touchdown, a five-yard carry and five punt returns for 31 yards in 73 snaps over 13 games ... had a five-yard carry in eight snaps against SC State on Sept. 7 ... had three receptions for 10 yards and 18 yards on two punt returns against Wake Forest on Sept. 28 ... had a six-yard reception at Syracuse on Oct. 5 ... had a five-yard reception and two punt returns for 10 yards at Virginia on Nov. 2 ... had two receptions for -1 yards, including a two-yard touchdown, and a three-yard punt return against The Citadel on Nov. 23 on Military Appreciation Day.

2012: Won the Discover Orange Bowl-FWAA Courage Award ... won the USAA Athletic Inspiration Award ... attended the ESPYs as a finalist for the Jim Valvano Perseverance Award ... semifinalist for the Armed Forces Merit Award ... had three receptions for 10 yards in 46 snaps over 13 games ... played special teams against No. 25 Auburn at Atlanta, Ga. on Sept. 1; it was his first career game ... had a four-yard reception against Ball State on Sept. 8; it was his first career reception ... played seven snaps against Furman on Sept. 15 ... had a special teams tackle against Virginia Tech on Oct. 20; led the team down the Hill carrying an American flag on Military Appreciation Day ... had one reception at Wake Forest on Oct. 25 ... had a 10-yard reception at Duke on Nov. 3.

Before Clemson: Enrolled at Germanna Community College, which does not offer athletics, in the spring of 2011 ... named 2011 Southern Pigskin Person-of-the-Year ... played three seasons (2003-05) at Brooke Point High School ... played slot receiver, running back, cornerback, holder, quarterback and returned kicks ... his team reached the regional playoffs as a senior ... played against many future NFL players who attended Virginia Tech, including Eddie Royal ... played four seasons of basketball as a point guard ... coached by Jeff Berry at Brooke Point High.