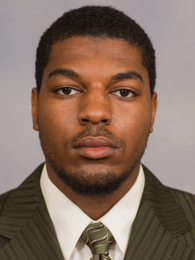 Defensive End
B I O
Redshirt freshman who was a reserve defensive end in 2014.