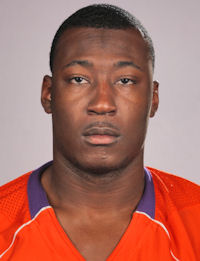 Defensive End
B I O
Had 75 tackles, 10 tackles for loss, three sacks, one interception for 20 yards, 13 quarterback pressures, three pass breakups, and two recovered fumbles in 869 snaps over 49 games (one start) in his career...athletic defensive end...protegé of former Clemson All-ACC defensive tackle Brentson Buckner, who was defensive coordinator at his high school.

2010: Had 17 tackles, two tackles for loss, and four quarterback pressures in 212 snaps over 11 games...had three tackles in 42 snaps against North Texas...had five tackles, a tackle for loss, a recovered fumble, and a blocked punt in 53 snaps against Presbyterian College; he was the only Tiger to block a punt in 2010...had two tackles and a tackle for loss against Georgia Tech...suffered a high-ankle sprain at Boston College that limited his play in the second half of the season; the injury took place on his second snap at Boston College and he missed the N.C. State and Florida State games...played two snaps at Wake Forest and 15 snaps against #17 South Carolina when he had three tackles.

2008: Made one start (against The Citadel when Ricky Sapp was out with an injury); he played 42 snaps and had two tackles along with three quarterback pressures...played double-figure snaps in every game and had at least one tackle in 10 contests...had 21 tackles...had three tackles and tackle for loss in 20 snaps against Nebraska in the Gator Bowl...had a season-high four tackles against S.C. State and three tackles versus N.C. State.

2007: Played 118 snaps in 11 games as a first-year freshman...missed the Florida State and Georgia Tech games...had his best game against Wake Forest when he had four tackles in 22 snaps, including his first career sack...had three tackles in 13 snaps and a tackle for loss at Duke...had nine of his 12 tackles in the last five games...played a season-high 23 snaps against Central Michigan...played 17 snaps in the Chick-fil-A Bowl against #21 Auburn.

Before Clemson: Rated as the #12 weakside defensive end in the nation by Rivals.com...member of the Rivals 250 by Rivals.com...#21 defensive end in the nation by Scout.com...#7 prospect in North Carolina by Rivals.com...#15 prospect in North Carolina by SuperPrep...Charlotte Observer Defensive Player-of-the-Year as a senior...had 95 tackles and 33 sacks as a senior at Victory Christian Center School...one of the top players in the Shrine Bowl; he totaled three sacks and a blocked field goal...had 15 sacks as a junior...helped his team to a berth in the semifinals of the state championship as a senior...first-team all-conference in basketball; his team won the state title...coached by Frank Crockett...recruited by Billy Napier...chose Clemson over Alabama, Michigan, North Carolina, Tennessee, and Virginia Tech.