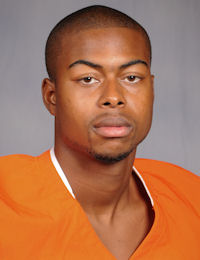 Wide Receiver
B I O
Overview: Caught a touchdown pass from a quarterback (Kyle Parker), a wide receiver (Jacoby Ford) and a running back (C.J. Spiller) in 2009...first Clemson receiver to catch a touchdown pass from three different players in the same year, never mind it being players who play three different positions...named to the All-State AFCA Good Works team in 2009, one of just 11 FBS players honored...just the third Clemson player named to the team since it was started in 1992...he joined Robert Carswell (1999) and Nick Eason (2000)...singled out for his outstanding work in community service...tied for first on the team in the vertical jump with a 39-inch figure...third on the team in the broad jump with a leap of 10'1"...has 24 catches in his career in 38 games, he is the team's active leader in receptions entering this year...has missed just two games, both in 2009...thought about transferring early in the season and missed some practices, but decided to return and was a big part of the Clemson offense thereafter...enrolled at Clemson in January of 2007.

2009: Fourth on the team with 14 receptions for 236 yards, a 17-yard average...the leading returning receiver on the team for 2010...had three catches at Maryland for 29 yards and three catches for 68 yards in the win over Florida State...that is his career-high in yardage...started each of the last nine games...had at least one catch in eight of the last 10 games...had a touchdown catch in consecutive games against Coastal Carolina, Florida State and N.C. State...had a 43-yard catch against Florida State that was his career long...second-leading receiver among wideouts on the 2009 Clemson team.

2008: Second-team wideout who had six catches...started two games (N.C. State, Maryland)...had three catches for 37 yards in a season-high 30 snaps against S.C. State...had two catches against The Citadel and one at #21 Wake Forest; his 22-yard catch on fourth down kept Clemson's final drive alive...played 28 snaps against Duke and threw a key block on a touchdown.

Before Clemson: Rated as the #41 wideout in the nation by Rivals.com...#66 wideout in the nation by Scout.com...#14 player in South Carolina by SuperPrep...#13 prospect in the state by Rivals.com...had 37 catches for 614 yards and four touchdowns as a junior at Greenwood High School...started midseason at James F. Byrnes High School as a senior after transferring; he had 32 catches for 524 yards and six touchdowns in four games...played with fellow Tiger Chad Diehl, as well as former player Stanley Hunter and Willy Korn (now at Marshall) at James F. Byrnes High...recruited by Ron West...chose Clemson over Georgia, North Carolina, and N.C. State...born May 14, 1988...majoring in sociology.