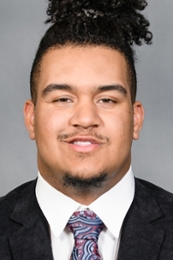 Offensive Line
B I O
Enters his third year in the program in 2022 having played 79 snaps over nine games.
2021:Played 68 snaps over six games … played 15 snaps vs. SC State as Clemson exceeded both 200 rushing yards and 200 passing yards … played 48 of Clemson’s 100 plays in helping the Tigers exceed 300 passing yards vs. UConn … played three snaps at South Carolina.
2020: Played 11 snaps over three games as a true freshman … played three snaps in collegiate debut at Wake Forest … played four snaps in Clemson’s shutout win vs. The Citadel … played four snaps vs. Pitt.
Before Clemson: Played for Steve Matthews at Knoxville Catholic High in Knoxville, Tenn., the same school that produced Clemson receiver Amari Rodgers … was a consensus four-star offensive lineman … graded out at 85 percent from his offensive tackle position in 2019 … three-time all-state selection … 5A Region Offensive Lineman of the Year … a four-time All-Region selection … played on state championship team in 2017 … at the time of his signing, ranked as the No. 132 overall player in the nation, the fourth-best offensive tackle and the fifth-best player in Tennessee by ESPN.com … rated as the No. 188 overall player, 10th-best offensive tackle and ninth-best player in Tennessee by PrepStar … ranked as the No. 207 overall player in the nation by Rivals.com, which also listed him as the No. 8 offensive tackle and No. 7 player in the state of Tennessee … selected to Under Armour All-America Game … committed to Clemson on March 14, 2019 … recruited to Clemson by Robbie Caldwell.
Personal: Born Sept. 10, 2001 … enrolled at Clemson in January 2020 … pre-business major … name pronounced BRINE.