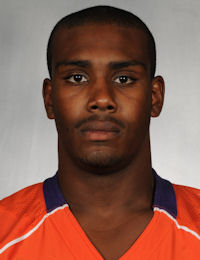 Offensive Tackle
B I O
Had 80 knockdowns in 1,329 snaps over 42 games (18 starts) in his career...one of the most versatile offensive linemen on the team; he saw action at guard and tackle.

2009: Played in just two of the first four games for 14 total snaps, then played in each of the last 10 games for a total of 12 games...averaged just 4.5 plays per game the first four games and 18 snaps per game over the last 10 games of the year...played 25 snaps in the win over Wake Forest and had an 81 percent film grade...followed that with an 81 percent grade for 36 plays at Miami (FL), he had a career-high five knockdowns in the Tigers' win over the #8 Hurricanes...had an 82 percent grade in win over Coastal Carolina, giving him three straight games with grade of 81 percent or better...also had an 83 percent grade in 20 plays in the important road win at N.C. State...had an 81 percent grade against Georgia Tech, helping the Tigers to 323 rushing yards in the ACC Championship game...finished the year with 201 snaps of action and 12 knockdowns...all of his knockdowns came in the final 10 games of the season...did not play against Georgia Tech (in Atlanta) or the loss to TCU, so Clemson was 9-3 when he played and 0-2 when he did not...played 10 snaps against Kentucky in Music City Bowl.

2008: Began the year as the second-team left offensive guard, then started the second game against The Citadel...started three consecutive games, all victories...played 35 snaps against The Citadel, 55 against N.C. State, and 24 against S.C. State; he had seven knockdowns in 24 snaps and graded 72 percent before he suffered an ankle injury; that high ankle sprain put him on the bench for the next three games...played 124 snaps before his injury and just 14 snaps after the injury...played 138 snaps in seven games (three starts) and had 17 knockdowns.