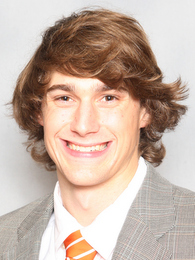 Wide Receiver
B I O
Original walk-on who served as a reserve wideout ... had one reception in 55 snaps over eight games in his career.

2013: ACC Academic Honor Roll member ... member of Clemson’s All-Academic team for having the team’s highest GPA ... received the Danny Ford Scholarship Award ... played seven snaps over one game ... played seven snaps against SC State on Sept. 7 ... suffered a broken ankle in practice on Sept. 17 and was lost for the season ... had three receptions for 39 yards in the Spring Game.

2012: Member of Clemson’s All-Academic team for having the team’s highest GPA ... played eight snaps over three games ... played five snaps against Ball State on Sept. 8; it was his first career game ... played one snap against Furman on Sept. 15 ... played two snaps against Maryland on Nov. 10.