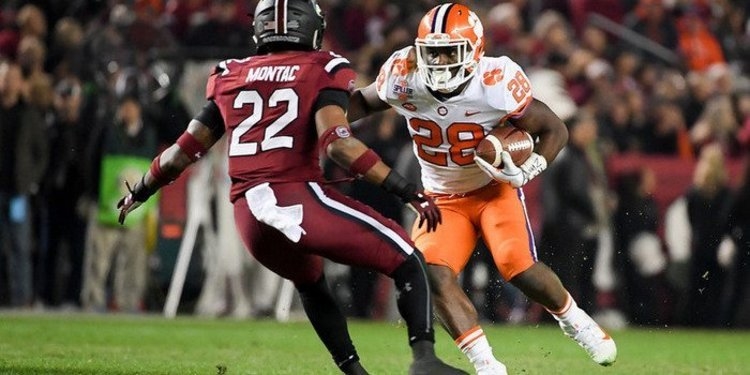 It’s rivalry week and Clemson’s instate rival would like nothing more than the cliche of 'records being thrown out' to be true.

Dabo Swinney’s Tigers are seeking only the third winning streak of five or more games in the series overall - coming in on one of the most dominant runs the battle for the Palmetto State has seen.

In the last two games, the Tigers have outperformed the Vegas spread by 16.5 points per and head into Saturday as a 26.5-point favorite. Although Clemson has covered the number in four of Trevor Lawrence’s last five starts, the metrics consensus is a 20-plus-point win that doesn’t quite reach the current line.

The S&P+ and TeamRankings each take the Tigers by 25 points, while the FEI (38-16) and numberFire (35-16) see it as more of a three-score game. Here's how the sides match up going in and some areas to watch below:

What stands out from those figures above is a South Carolina defense that ranks 116th in stopping opponents successfully per play. They match-up a defense ranked 87th versus rushing efficiency against a Clemson offense that's eighth-best on the ground.

The Gamecocks have given up 278 rushing yards per game versus currently-ranked opponents, which ranks 89th nationally - surrendering 3.2 rushing touchdowns per game. Clemson has averaged a third-best 6.8 yards per carry with 3.2 rushing TDs a contest versus unranked foes.

On the other side of the ball, South Carolina sports a better-than-average offense - ranking top-35 overall on ESPN (31) and with the S&P+ (33), but Saturday’s test comes versus only the second top-25 defense on its schedule.

Clemson is No. 1 defensively in both ESPN’s and the S&P+ metric - also best in containing opponent explosiveness (1st in marginal efficiency), opponent rushing (S&P+), opponent standard downs offense# (S&P+) and points allowed per scoring opportunity (2.81; drives that go inside an opponent’s 40).

Justyn Ross is the national leader in yards per route run through 12 weeks pic.twitter.com/9PSnwcDkpC

Trevor Lawrence had the highest passing grade among ACC QBs this past weekend pic.twitter.com/xGe0ktcMH0