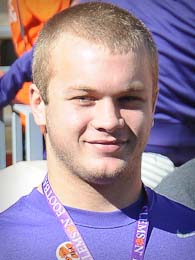 Outside Linebacker
B I O
As a junior, he had 178 tackles and 4 sacks. As a sophomore, he recorded 151 tackles, 4 sacks, and 4 ints. He took an unofficial visit to Clemson for the Clemson-Auburn game on 9/17/2011. He also visited the Clemson-North Carolina game. He is a power-hitting catcher and corner infielder for TL Hanna. He wants an opportunity to play football and baseball in college. He has committed to play in the 2013 Under Armour All-America game. Committed to Clemson on 3/28/2012.

Hardnose and physical LB that shot up the recruiting rankings after scouts saw him at the UA All-America game.