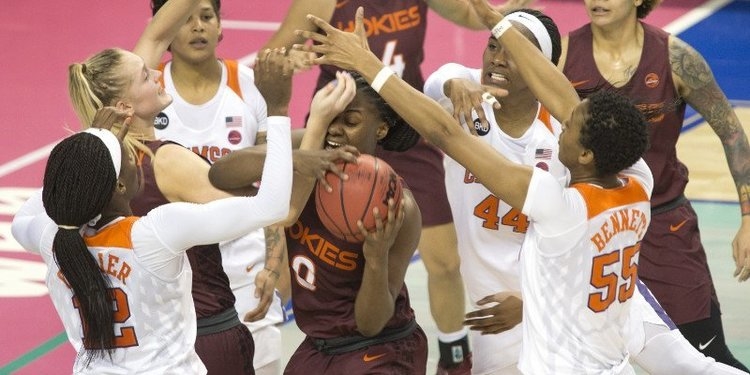 GREENSBORO, NC - Aliya Collier came off the bench to score 28 points, including all nine of Clemson's in overtime, and the seventh-seeded Tigers held on to beat No. 10 seed Virginia Tech 80-79 in the second-round matchup of the ACC tournament on Thursday.

Collier made two 3-pointers in scoring eight straight points to give Clemson (20-11) a 79-74 lead with 1:48 left in overtime and her free throw made it a four-point margin with 6.2 seconds left. The Hokies' Taylor Emery, who finished with 35 points for a school ACC tournament record, made a three at the buzzer.

"You know, we were able to beat a really, really good team today. Virginia Tech is just one of the best performing teams in our league in February and down the stretch, and obviously their performance yesterday," head coach Amanda Butler said. "So they certainly put up a great fight and we've got a great deal of respect for them.

"Really, really proud of my ugly duckling Clemson Tigers, though. Just fought. It wasn't our prettiest game, but we don't ever really count on pretty. We're just going to play hard and grind it out. And we kind of have this agreement, we're all going to do what it takes and then be okay with where we end up after that. But tremendous senior leadership. Tremendous balance. Dani got us out of the gates. Aliyah was just doing her thing the whole ball game. Kobi had a section where she led us. Destiny Thomas had a section where she led us. But ultimately it came down to us being able to get stops. And we're really proud when we can be in that position and then come out on top that way."

Emery gave the Hokies (19-11) a 71-69 lead with a 3-pointer with 20 seconds left in regulation before Kobi Thornton hit a short jumper to tie it with 10.7 seconds remaining. Emery then had the ball knocked away from her to send the game into OT.

Collier, who averages under 22 minutes and 12 points a game, went 10-of-22 shooting with four 3-pointers in 33 minutes against Virginia Tech while grabbing 10 rebounds.

Collier said she just went with the flow.

"Wasn't seeing really much, just was going with the flow of the game," Collier said. "Get it out and in. Get down. We know what defense they were running, so we were prepared to attack their defense and at least try to get to the foul line."

The largest lead by either team was six points.

Butler said she was thrilled with her first ACC tourney win.

"I'm happy to be here. I don't know. Is that too simplistic to say? I'm really happy to be here," Butler said. "I'm happy to be a Clemson Tiger. This is the best conference in the country. And I just feel really blessed and fortunate to be coaching such a special group of women who compete for each other every single night.

"Greensboro puts on a first-class event. I've always admired it from afar. And it's just, like I said, it's an honor and a privilege to be part of it, and it makes it even special when you're part of it and you're a winning part of it. We're really excited to be playing in the quarterfinals. That hasn't happened for my seniors ever. So we're going to celebrate for another 10 or 15 minutes before we start thinking about the next one."

Clemson takes on third-ranked and second-seeded Louisville in the quarterfinals.

?? highlights from a ?? game pic.twitter.com/WuFHPFO5bB

- Thursday night’s game was the 18th overtime contest in ACC Women’s Tournament history and the first since Pitt’s 82-72 win over North Carolina in the opening round in 2016.

- With her career-high 28 points and 10 rebounds, senior Aliyah Collier more than lived up to her billing as one of the ACC’s premier reserve players … Collier, who is has come off the bench in 16 of the 21 games in which she has appeared, is averaging nearly 12 points per contest and leads all ACC reserves with a shade more than 7.5 rebounds per game … Collier ranks third among all ACC guards (starters or reserve) in rebounding average.

- Collier reached her new career high on her game-clinching free throw that put Clemson up 80-76 with six seconds left … She surpassed her previous high of 27 points set against UNC during the 2017 regular season.

- After scoring a game-high 26 points in Wednesday night’s opening-round win over Wake Forest, Virginia Tech’s Taylor Emery topped herself with a career-high 35 on Thursday night. Emery has led the Hokies in scoring in each of the last four games and in six of the last seven.

- Clemson improved to 32-39 all-time in the ACC Tournament and won an ACC Tournament game in the Greensboro Coliseum for the first time since 2014 (the Tigers also defeated Virginia Tech at Conway, S.C., in 2017).

- Virginia Tech slipped to 6-15 all-time in the ACC Tournament.