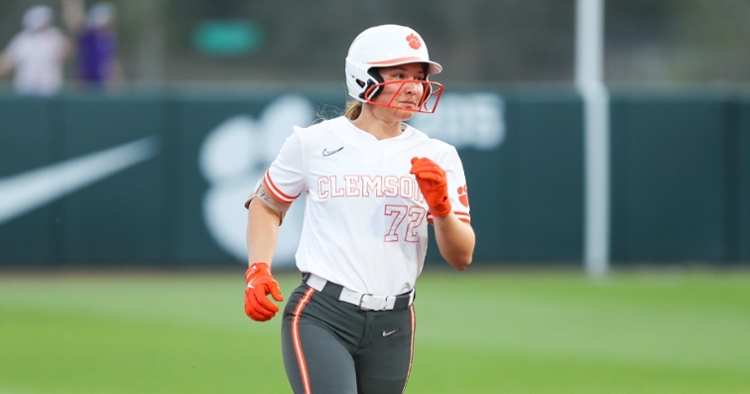 Redshirt sophomore Cagle (Yorktown, Va.) was the lone Tigers to be named to the First Team as an at-large selection after batting .311 during the regular season with 50 hits, including nine doubles and 11 home runs. She has scored 31 runs and brought in 39 while maintaining a .584 slugging percentage and .371 on-base percentage. In the circle, Cagle has maintained a 1.83 ERA with 14 wins and six solo shutouts. She has pitched 134 innings and struck out 160 batters while picking up three saves. Cagle is the first Tiger to earn back-to-back first team honors for the softball program.

Clark (Myakka City, Fla.) was the only Second Team selection for Clemson after batting .321 through 51 games. She tallied 50 hits, including 11 home runs, and leads the Tigers with a .622 slugging percentage and 37 runs scored. She holds a perfect fielding percentage in centerfield with 43 putouts and four assists. In 24 ACC games, the sophomore leads the team with a .356 average with 26 hits, nine home runs, 19 RBIs and 19 runs scored. She holds a .808 slugging percentage after tallying three home runs in a single game at FSU.

Logoleo and Thompson both earned Third-Team All-ACC honors. Logoleo (Nashville, Tenn.) is batting .271 on the year with 11 home runs, 25 runs scored and 38 RBIs. The redshirt sophomore tallied eight RBIs after going 3-for-4 with two home runs, including a grand slam, against North Carolina.

Vieira (Mission Viejo, Calif.) rounds out the Clemson honorees earning All-Freshman honors, her first ACC honors of her career. She leads the team with a .326 average through 35 games this season after clocking 28 hits, including four home runs. She has scored 10 runs while bringing in 13 and holds a .500 slugging percentage.

The No. 15/15 Clemson Tigers enter the ACC Softball Championship on Thursday as the No. 5 seed taking on No. 4 Notre Dame at 1:30 p.m. in Pittsburgh, Pa. on the ACC Network in the quarterfinals.