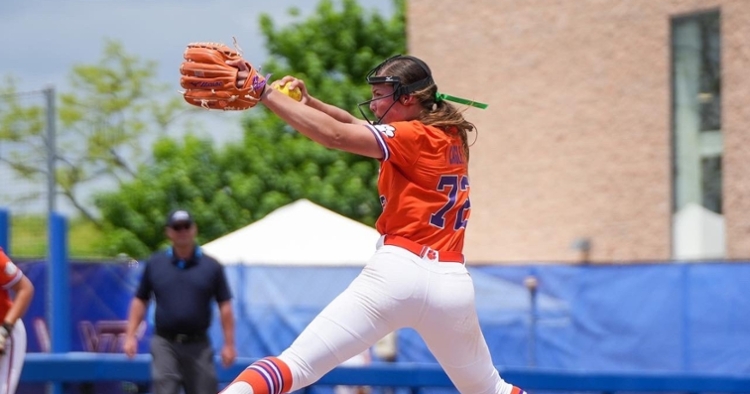 Clemson softball is playing for an ACC Championship on Saturday in Pittsburgh.

The No. 15-ranked Tigers knocked off No. 2-ranked and tournament 1-seed Virginia Tech, 4-1, at the ACC Softball Championship at Vartabedian Field on Friday afternoon. Clemson will take on Florida State at 1 p.m. on ESPN Saturday.

It is the highest-ranked win in the program’s three-year history and a second top-5 win this season (Clemson downed No. 5 Washington in February). It snapped a 10-game winning streak for the Hokies (41-7), after Virginia Tech came to Clemson and swept the Tigers earlier this season.

Alia Logoleo homered in a second-straight tournament game to put Clemson (39-14) on top, 1-0, in the second inning, and hit a towering shot to add some insurance later in the seventh inning.

Clemson tacked on another run in the fourth inning with a throwing error on the third baseman that scored McKenzie Clark all the way from first base on a Marissa Guimbarda single.

Arielle Oda’s sacrifice fly then scored Sam Russ after she led off the fifth inning with a triple.

The Hokies were held hitless until the fifth inning by Valerie Cagle (15-7) in the circle, but Virginia Tech broke through for a run in the sixth after a pair of hits and a run-producing groundball.

Cagle went the distance (14th complete game of the season), allowing just four hits with two strikeouts, a walk and a hit batter. Her opposite number Emma Lemley gave up five hits and three earned runs with six strikeouts and two walks.

Sam Russ showing off the speed on this catch ???? @clemsonsoftball pic.twitter.com/JGCnOt3bFM

Come for the HR, stay for the bat flip ?? @clemsonsoftball pic.twitter.com/RtPfC4WKRi

Alia Logoleo checking in after a HUGE performance ???? @clemsonsoftball pic.twitter.com/DsNUiyOk6J