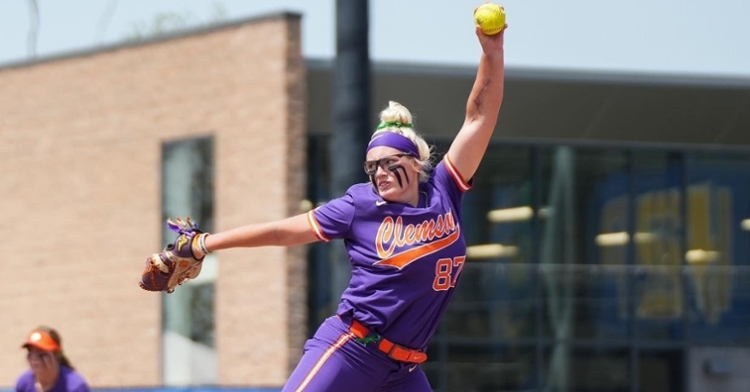 No. 15-ranked and 5th-seeded Clemson softball rallied from an early deficit to top 4-seed and No. 19 Notre Dame, 7-3, in the ACC Softball Championship quarterfinals at Vartabedian Field in Pittsburgh, Pennsylvania on Thursday.

Clemson left-handed pitcher Millie Thompson (13-3) retired the first two Irish batters she faced in the first inning, but a two-out single and then a two-run homer from Notre Dame’s Karina Gaskins dug an early hole for the Tigers.

Clemson tied it right back up in the next half-inning, however, with a two-run homer of its own from Alia Logoleo to center field.

Clemson’s Cammy Pereira placed the Tigers on top with a solo shot to center in the fifth, and the rally continued from there with Aby Vieira’s two-run single chasing Notre Dame starter Alexis Holloway (14-3).

The Tigers added some insurance in the seventh inning with a solo homer to left field from Valerie Cagle and an RBI single from Sam Russ. Notre Dame answered with a run in the seventh but Thompson stranded two runners to end the threat.

Clemson plays 1-seed Virginia Tech in the semifinals on Friday at 1 p.m. on ACC Network. The Hokies swept the regular-season series with Clemson at McWhorter Stadium and are riding a 10-game winning streak at 41-6 on the season after a 2-1 win over Syracuse on Thursday.

Pushing not only to challenge for the ACC crown but also secure an NCAA Regional next week, the Tigers entered the week at No. 10 in the RPI and No. 7 in strength of schedule.

Clemson has won 3-of-4 this season over Notre Dame after winning the series last month.

Vieira finished the day 2-for-3 with a run scored and Cagle also had a multi-hit game and drew a walk to reach base three times.

Throwback Thursday to the first five innings of the game ????#Team3 pic.twitter.com/C31v4ZaCKm

A small selection of our favorites from today ??#Team3 pic.twitter.com/j7Ws1kqnvS