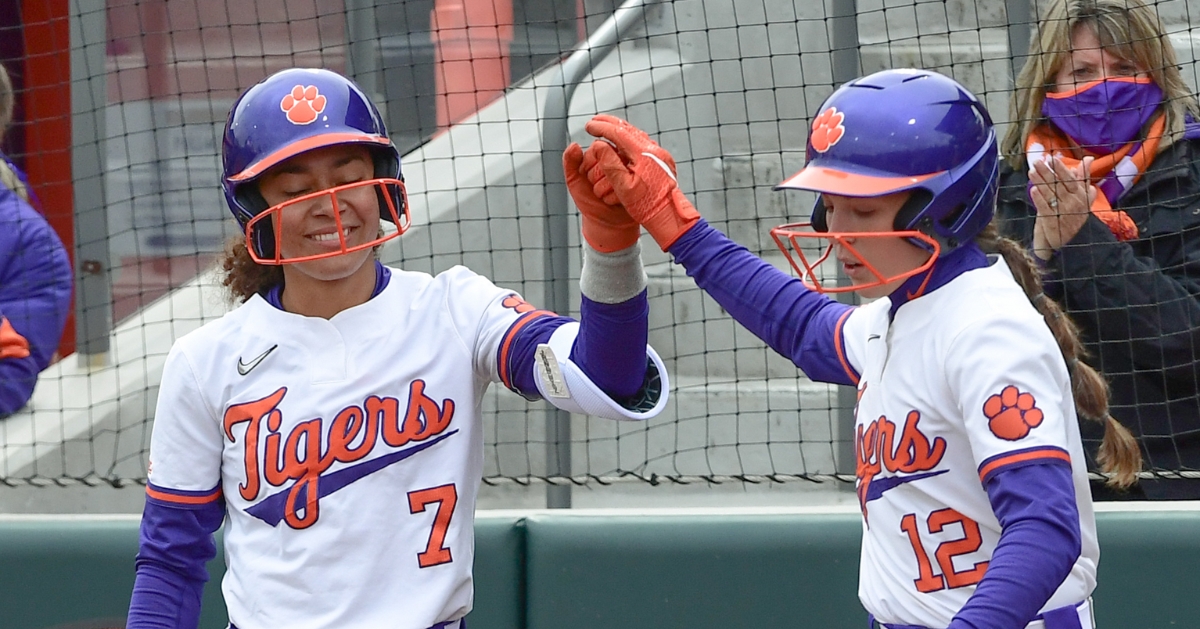 The No. 18 Clemson softball team completed the series sweep over North Carolina on Saturday afternoon, scoring four runs in the third inning and defeating the Tar Heels 9-1 over six frames at McWhorter Stadium. Valerie Cagle picked up her 16th win and 15th complete game of the season in the circle.

Clemson improves to 26-4 overall and 18-4 in conference play, the most conference wins in the ACC. The Tigers have now won six in a row following their 17-game winning streak that was snapped last weekend by Duke. It is also the sixth series Clemson has swept this season.

It was another day at the office for the redshirt freshman right-hander Cagle, tossing 6.0 innings, allowing one earned run on four hits and struck out eight. Cagle moves to 16-3 on the season and also was 2-for-4 at the plate with an RBI.

“Valerie had to pitch in three games for us this weekend and she did a great job,” Clemson head coach John Rittman said about his ace. “Very proud of Valerie's effort and she just continues to get better. She’s pitched phenomenal this year.”

Marissa Guimbarda entered the day 1-for-8 at the plate during the series but connected with a ball that landed on the berm in left field for her team leading eighth home run of the season. True freshman McKenzie Clark also had a nice day at the plate, recording three RBIs and a home run, her fourth of the season. Clemson improved to 21-0 when hitting a home run.

The Tigers will travel on the road to South Bend, Indiana for a four-game series with the Notre Dame Fighting Irish next weekend, April 9th-11th. The Irish currently sit in fifth place in the ACC standings and have a 17-9 record overall.

Clemson got its first scoring chance in the second inning, putting runners on first and second with two outs after two singles from Abi Stuart and Cammy Pereira. The Tigers were unable to put any runs up on the scoreboard as the next batter struck out, leaving two left on base.

North Carolina threatened the next half inning, putting its first runner in scoring position after a single and a stolen base with two outs. Cagle slammed the door shut on the threat, popping up the Tar Heels batter to record the final out of the inning.

The Tiger offense exploded for four runs in the bottom of the third, highlighted by Guimbarda’s home run. Stuart and Kyah Keller also recorded hits and Keller picked up her fifth RBI of the series with a single to left field.

Clark extended the Clemson lead to 6-0 in the following inning with a home run over the left field wall. She now has six doubles, five triples and four home runs on the season.

North Carolina got on the scoreboard in the sixth, using two hits to plate a run and cut into the Clemson lead.

The Tigers responded with three runs of their own to run-rule the Tar Heels in six innings. Clark, Morgan Johnson and Cagle all picked up RBIs in the inning and Clemson walked away with the series sweep with a 9-1 score.

That's Marissa's team-leading eighth home run of the season and second of the series!

Kyah Keller (@KyahRayK) picking up from where she left off yesterday ??