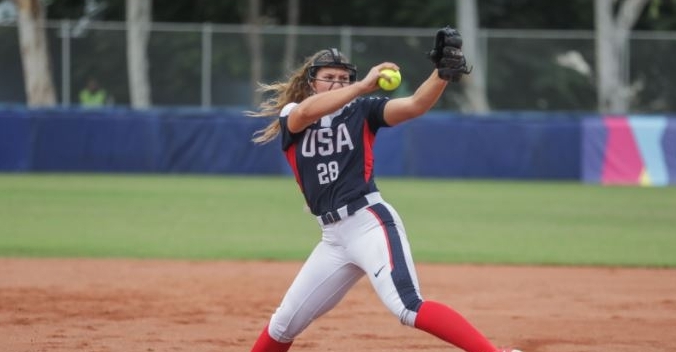 Cagle impressed in the circle and at the plate in the Pan American Games. (Photo via Clemson softball Twitter account)

Clemson softball fans have known that Valerie Cagle is a force to be reckoned with, and now the entire world is finding that out. Over the course of the last week, Cagle has been competing with Team USA in the Junior Pan American Games in Barranquilla, Colombia. Cagle and Team USA went undefeated during the games and defeated Mexico on Thursday for the Gold Medal. Now, the team and Cagle will head to Lima, Peru for the U-18 WBSC Women’s Softball World Cup from December 6-12.

So how did the reigning ACC Freshman and Pitcher of the year fare in the Junior Pan American Games? One word: dominant.

The redshirt sophomore appeared in five of the six games, knocking in 10 runs on three home runs and a double. The Virginia native batted a staggering .556 with a 1.667 slugging percentage and 2.333 OPS.

Cagle also led the team in wins with three wins in her three appearances during the tournament. The Red, White and Blue did not allow a run to cross the plate in their six games. In her 13.0 innings of work, Cagle struck out 28 while scattering three hits allowed across those three innings.

The team started the tournament with a 9-0 win over Argentina on Saturday November 27th. Cagle saw her first plate appearance late in the game, and drew a walk to begin her Pan American Games. The second game of the tournament saw USA explode at the plate for 29 runs in a shortened 29-0 three inning game over host country Columbia. Cagle pitched two innings and allowed a single hit while striking out three. At the plate on the day, Cagle showed off why she was one of three nominees for NFCA Freshman Player of the Year last year, hitting three home runs, two of which were grand slams, and driving in 10 runs in a 26-run second inning.

After a 13-0 win over Peru on Monday and a 3-0 record for Team USA, Cagle helped the team improve to 4-0 with a dominant performance in the circle against Puerto Rico on Tuesday the 30th. Cagle tossed seven innings of scoreless softball, allowing two hits while striking out an incredible 17 batters.

The Red, White and Blue will kick off the round-robin portion of the World Cup on Dec. 6 against No. 40 Columbia before facing the seven other countries at the tournament. U.S. is looking to claim a fourth-consecutive WBSC Junior Women’s World Championship title, having won the previous three World Championships in 2015, 2017 and 2019.