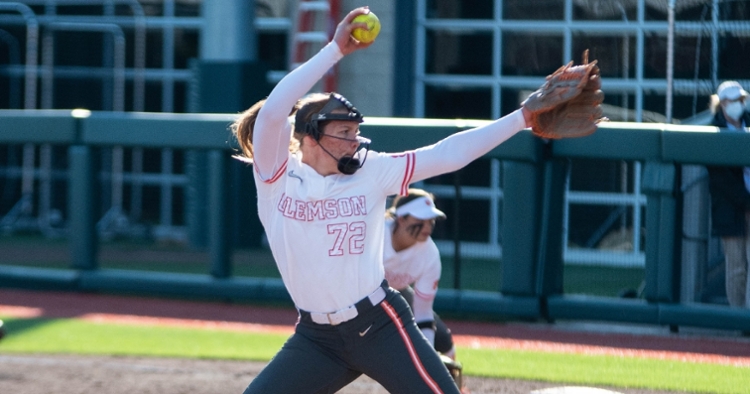 Cagle is playing well in the circle and at the plate. (ACC photo)

CLEMSON, S.C. – For the first time in her career, Clemson Softball second-year freshman ace Valerie Cagle (Yorktown, Va.) has been named the ACC’s Pitcher of the Week, the conference office announced on Wednesday. Cagle is the only player in the conference this season to garner both player and pitcher-of-the-week honors, having been named the ACC’s Player of the Week two weeks ago (March 24).

Cagle led the Tigers in the circle in their four-game series sweep over North Carolina, marking the fourth ACC series sweep for Clemson this season. She went 3-0 in three appearances and tossed a pair of complete games, while registering a 1.24 ERA. She also combined for 29 strikeouts, good for nearly 12 strikeouts per 7.0 innings pitched. Cagle, one of the nation’s best two-way players, also contributed offensively in the Tigers’ sweep over North Carolina. She hit .462 in 13 at-bats, knocked in two RBIs and scored three runs in the series.