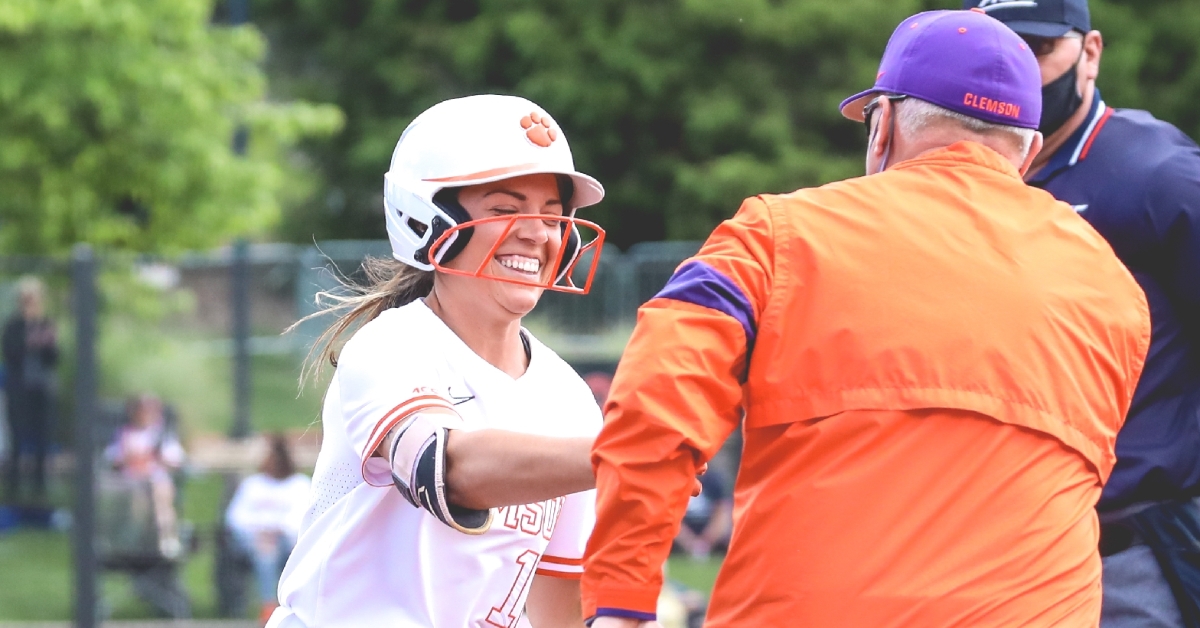 ACC player of the year Valerie Cagle was as cool as the other side of the pillow in Thursday’s ACC Tournament Second Round matchup with Georgia Tech, striking out a career-high-tying 14 batters in No. 1-seed Clemson’s 2-0 win. In the program’s first-ever postseason game, the Tigers now move on to play in the ACC Semifinal on Friday at 1 p.m. (ACC Network).

Both of the Clemson runs came off the bat of Cammy Pereira, who came into the contest with one home run on the season, but Pereira launched two solo homers over the right field fence at Ulmer Stadium in Louisville, Kentucky.

The redshirt freshman from Virginia allowed one hit in 7.0 innings of work in the circle. It is Cagle's ninth game this season with double-digit strikeouts as well as her 24th complete game of the 2021 campaign. She moves to 25-4 on the season. The All-ACC First Team selection did allow six walks, but she was able to pitch around numerous scoring opportunities for the Yellow Jackets to get the defense back in the dugout.

The Tigers will play the winner of Thursday’s game between fourth-seeded Virginia Tech and fifth-seeded Notre Dame. Clemson dropped two of three earlier this season to the Hokies inside of McWhorter Stadium in the second weekend of the season. The Tigers’ trip to South Bend this season was canceled due to COVID-19 issues for the Fighting Irish, so it would be the first-ever matchup between the two programs.

"Really exciting game today, getting our first-ever ACC Tournament win," Clemson head coach John Rittman said after the game. "Valerie Cagle in the circle, can't say enough about her. She's a second-year freshman, learning how to pitch in these big games as we go and I am very proud of the way she pitched against a good hitting Georgia Tech team."

Rittman also said that Cagle should be fine after being hit by a line-drive on the final out of the game, but more tests and treatment will happen at the team hotel Thursday.

The Tigers got on the board first Thursday, as Pereira hit only her second home run of the season, barely clearing the fence in right field for the game's first run. A day after throwing a no-hitter, Georgia Tech’s Blake Neleman allowed two hits in the first two innings against Clemson.

Cagle saw one more than the limit in the circle during the first three innings. The redshirt freshman allowed a walk in the second with one out, but she came back to strike out the next two batters. The Tigers headed into the bottom of the third with a goose egg on the board on defense and Cagle struck out six of the ten batters she faced.

Clemson threatened to add to its lead in the home half of the fourth, putting two runners in scoring position with one out, but the offense was unable to plate any runs after a strikeout and a flyout to left field ended the threat and sent the 1-0 ballgame to the fifth inning.

The Yellow Jackets got a runner in scoring position after Cagle’s second walk of the afternoon and a stolen base. The Virginia native then recorded her 10th and 11th strikeouts to get out of the inning and keep the game-tying run on second.

Tech picked up its first hit of the contest in the top of the sixth, singling through the right side of the infield and putting runners on the corners with two outs. Originally, the runner was called out at third after Grace Mattimore threw her out from right field, but with the new ACC replay rule during the tournament, the call was overturned. After an intentional walk to put the play at any base, Cagle recorded her 12th strikeout to slam the door on the Yellow Jackets' momentum.

Pereira sent her second ball of the afternoon over the right field fence in the bottom of the sixth, doubling the Tigers’ lead and giving Cagle another insurance run in the final inning.

"I've been picked up a lot by my teammates this year while I've been struggling," Pereira told the media after her big day at the plate. "They've been the ones to come through in the tight moments, and I'm glad I could do that for them today because they really have been backing me up all season."

"I think that's just what experience does. It teaches you to be persistent and that on any given day, you can have a game. I've been just trying to stay in there and stay focused and I think that's really helped me.

The Yellow Jackets drew two walks against Cagle in the seventh, but the redshirt freshman got two strikeouts and a groundout to get the final outs.

BIG-TIME K from Valerie Cagle with bases loaded in the sixth??