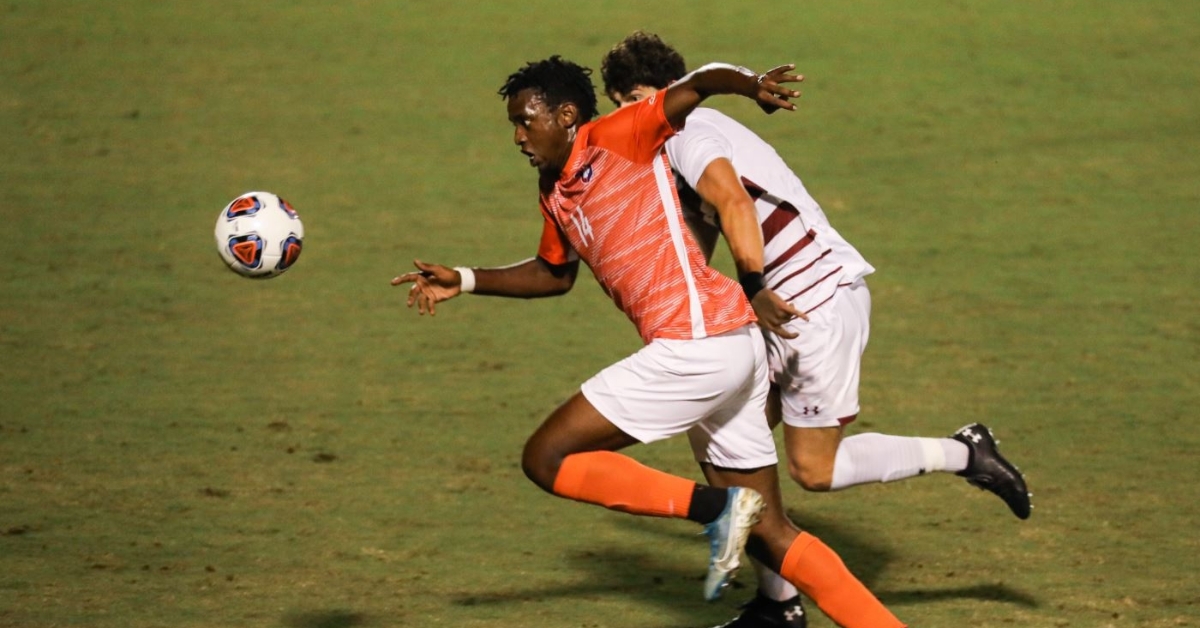 COLUMBIA, S.C. — Mohamed Seye netted two goals and No. 3 Clemson men’s soccer earned its seventh-consecutive win in the series, as the Tigers downed the South Carolina Gamecocks, 3-0, on Thursday night in Columbia. The win moves the Tigers to 1-0 on the season, while the loss drops the Gamecocks to 1-2.

“There’s no doubt we’ve been able to dominate the rivalry game, similar to several other sports at Clemson,” said Clemson Head Coach Mike Noonan. “It makes us proud, but we know this is just one game. This may be the only Clemson and South Carolina game this year, and if it is, it’s going in the Clemson win column and we’re very proud of that."

The Tigers controlled the possession game for the majority of the first half, out-shooting the Gamecocks 13-2 (eight Clemson shots on goal). In the 13th minute, Mohamed Seye headed home a cross from Grayson Barber to get the Tigers on the board first. Clemson continued to apply pressure on the South Carolina defense, with Seye earning a penalty kick in the 16th minute of play. Redshirt senior Callum Johnson stepped up and netted his first goal as a Tiger, giving Clemson the 2-0 advantage after the game’s first 45:00.

Seye netted his second goal of the game just over 1:30 into the second half to put the third-ranked Tigers in front 3-0. It was Seye’s second multi-goal game of his career, the first coming one year ago today, October 1, 2019, in a 3-0 win over College of Charleston. South Carolina had a couple of chances to end the shutout late in the second half, but Max Fisher made a brilliant save to keep the Gamecocks off the board.

Everyone that made the trip to Columbia saw action in Thursday’s contest. Seye led the Tigers with five shots, three on goal, while Chris Matalashewski, Kimarni Smith and Grayson Barber each had four shots. George Marks and Max Fisher split time in goal, each making one save.

“It’s a physically demanding game and we knew we were going to need a lot of players tonight,” said Noonan. “I was thrilled to get everyone in and it was a competitive match. To have people step into that game for the first time is not easy.”

Thursday’s match marks the final time that Noonan and South Carolina Head Coach Mark Berson coached against one another, as Berson is in his final year leading the Gamecocks after an illustrious 43-year career in Columbia.

“More than anything tonight, I want to honor Coach Berson. He was one of my mentors and we’ve had a wonderful and competitive relationship. More importantly, we’ve had a really fine friendship. I respect him as much as I respect anyone in the game. He’s a fine man.”

Clemson will now look ahead to its home opener against UAB on Monday, Oct. 5, with the match set to begin at 7 p.m. All matches at Historic Riggs Field are free to attend and a capacity of 1,000 spectators will be enforced. All fans in attendance are required to wear a mask or face covering unless eating or drinking.

That's 7 in a row for @clemsonmsoccer over the in-state rival!! Congratulations, #ClemsonUnited on a terrific opener!

Excited to see the team in Riggs next week! https://t.co/fWHxaeFDp0