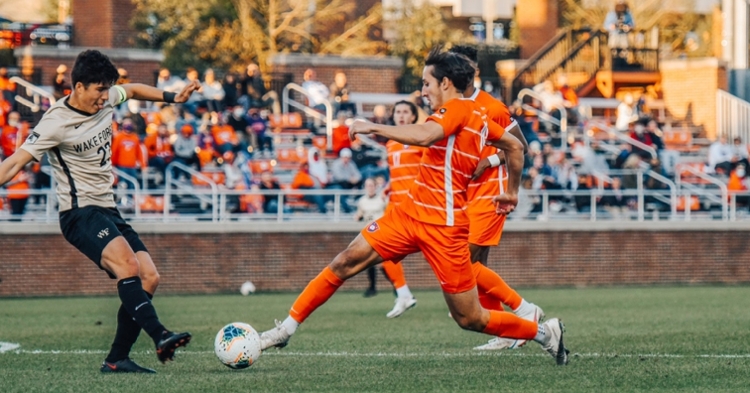 Clemson had its chances to secure the division Friday. (Daniel Brandalise/Clemson athletics)

CLEMSON, S.C. -- After 110 hard-fought minutes at Historic Riggs Field, No. 1 Clemson (12-2-2) and No. 4 Wake Forest (11-2-2) drew level at 0-0 on Friday night. Clemson proved to be the dominant offensive force in the match, registering 19 shots to the Demon Deacons’ nine. With three saves in the match, George Marks became the 15th goalkeeper in program history to eclipse 100 career saves.

“We wanted to clinch the division in front of our home fans, who were great tonight,” said head coach Mike Noonan. “Unfortunately, sometimes the soccer gods aren’t on your side and we weren’t able to finish the chances that we had in front of the goal. Defensively we were sound and I thought Hamady [Diop], Oskar [Agren] and George [Marks] were really good. John Martin was terrific when he came in. There’s still more work to do, but it’s fun because as a young group, they are still a work in progress.”

The Tigers found the back of the net five minutes into the match off a chance created by Mohamed Seye, but the goal was negated after Seye was whistled for a foul. The chance was one of many for the Tigers in the opening 45 minutes, as Clemson registered three shots, five corners and held the majority of possession.

As the two teams battled in the second half, Clemson continued to dominate offensively, as the Tigers recorded 11 shots in the period compared to the Demon Deacons’ six. In the 62nd minute of the match, Marks made his 100th save after stopping a shot by Wake Forest’s Oscar Sears on the goal line. The junior from Raleigh, N.C., recorded the 12th solo shutout of his career this evening, making him No. 9 all-time in the category at Clemson.

The Tigers’ continued to dominate in overtime, out-shooting Wake Forest over the final 20 minutes, 5-1. In the 95th minute, Clemson saw its best opportunity to win come off the head of Quinn McNeill, as McNeill fired a shot towards the center of the frame and forced Wake Forest’s Cole McNally to make a point-blank save.

Clemson men’s soccer will now travel to Louisville, Ky., to face the Cardinals on April 9 for the team’s regular-season finale. The match will be played at Dr. Mark & Cindy Lynn Stadium and kick-off is set for 7 p.m. on ACCNX.

George Marks makes a great save on the goal line to keep the deadlock at 0-0!

Moha Seye's shot is just off the ?frame as the score remains at 0-0!

Quinn McNeill puts a beautiful shot on goal to test the goalkeeper midway through our first period of OT!