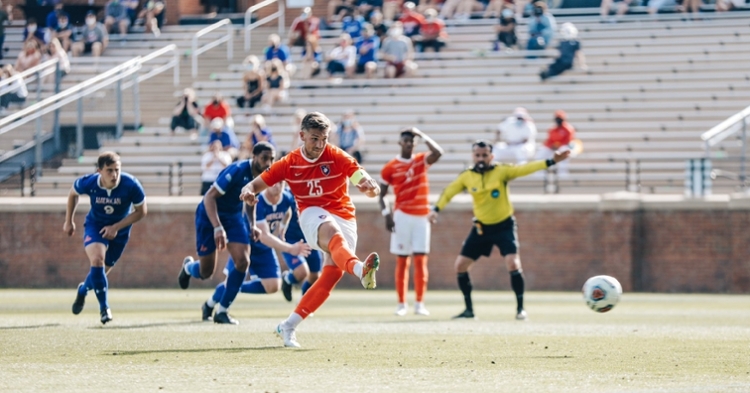 WINSTON-SALEM, N.C. -- Behind goals from Mohamed Seye and James Brighton, the No. 1 Clemson men’s soccer program came from behind to down American University, 2-1, on Sunday afternoon. The win advances the Tigers to the NCAA Sweet Sixteen for the fifth time under Head Coach Mike Noonan.

American struck quickly, as David Coly netted the first half’s only goal in the game’s fourth minute. The Tigers, after a slow start that included two shots by American before the match had even reached the fifth minute, picked up the pressure and out-shoot the Eagles 9-1 throughout the remainder of the half.

Clemson continued the pressure to start the second half, taking back-to-back shots on goal, earning a corner kick, taking another shot on goal and earning another corner before Mohamed Seye netted the equalizer in the game’s 52nd minute, on an assist from Charlie Asensio and Luis Felipe Fernandez-Salvador. In the 63rd minute, James Brighton was awarded a penalty kick after American is called for a handball in the box, giving the Tigers the 2-1 advantage.

Clemson’s pressure held the Eagles to zero shots in the second half, while frustrating the Eagles into committing 17 total fouls. George Marks earned the win in goal, allowing one goal and making one save.

With the win, the Tigers advance to face Marshall on Thursday, May 6 at WakeMed Field in Cary, N.C.

Moha Seye finds the back of the net by scoring with his head off a beautiful ball by Charlie and Pipe!

James Brighton steps up to the penalty spot and calmly slots home the ball to give us a 2-1 lead!#ClemsonUnited ????