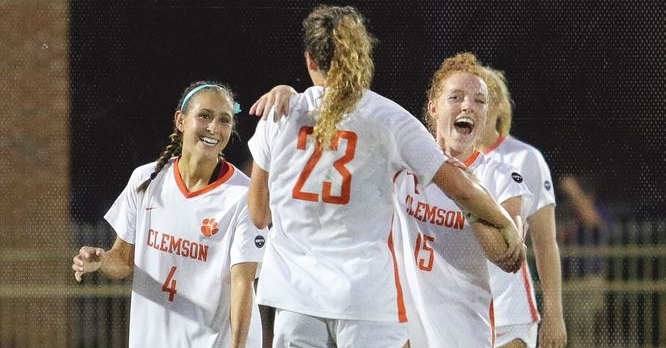 Clemson got the win over the Wolfpack (Photo courtesy: Clemson Women's Soccer Twitter)

NC State attacked early as the Wolfpack netted a goal in just the eighth minute of the first half to gain the early lead. Clemson began picking up the offensive pressure on the Wolfpack in the latter third of the first half as Renee Lyles drew a foul in the penalty box in the 38th minute. Sophomore Megan Bornkamp successfully converted on the penalty kick to tie the score at one a piece heading into the second half.

The Tigers and Wolfpack battled to score the game winning goal throughout the second half until Renee Guion laid in a beautiful ball to Caroline Conti, who assisted Renee Lyles in the 85th minute to solidify the Tiger win. Clemson extends their winning streak to five and wins its 19th match against NC State.

“We knew it wouldn’t be easy to play at NC State,” said Head Coach Eddie Radwanski. “Unfortunately we fell early, but we battled back and it was nice to see that we got on the front foot again and kept at them. We created a number of chances, and that last goal was a thing of beauty. I thought we thoroughly deserved the victory. These are the games in the ACC that you have to win. This was a great test, and it was awesome to see our team battle the way that they did.”

The Tigers will travel across town to play North Carolina on Sunday afternoon at 1 p.m. to finish the road stretch. Game coverage for the match will be available on ACCNX.