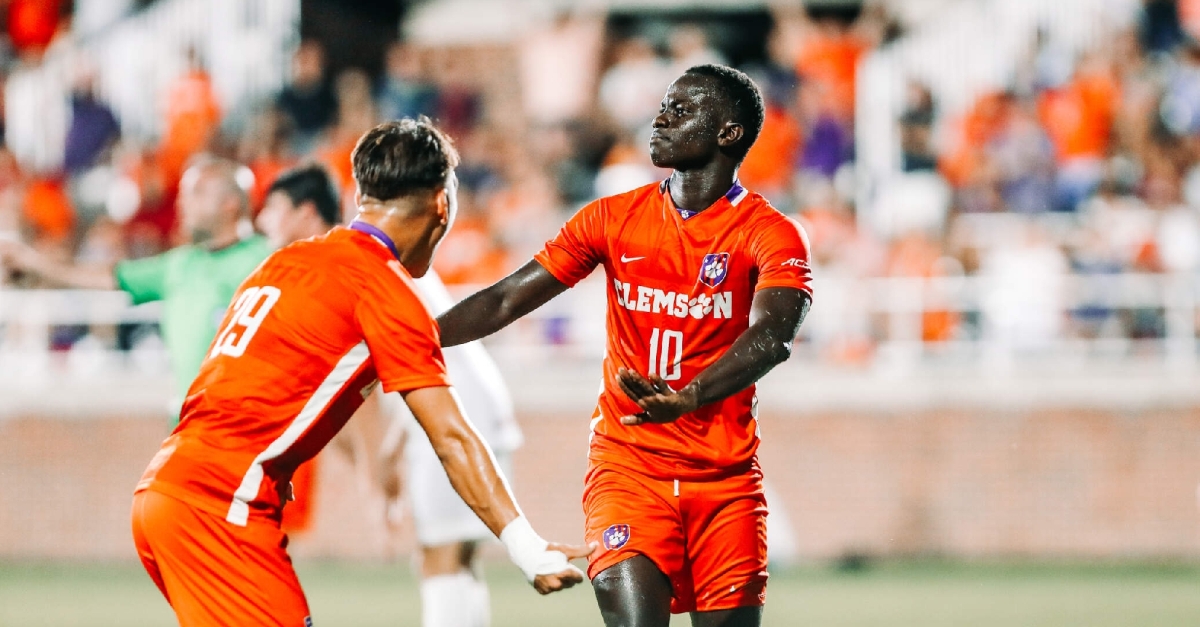 CLEMSON - “Oohs” and “ahhs” rang from the standing room-only crowd at Historic Riggs Field – and there were plenty standing around the grounds (6,539 announced attendance) – for Clemson’s early test with No. 13 Indiana to start the season on Friday.

Clemson men’s soccer coach Mike Noonan said this week that he wanted his No. 1-rated and defending national champion Tigers to put on a show – and Ousmane Sylla made sure late that those in orange, white and purple left happy after just that.

"You raise a banner and I know TigerTown will turn up," Noonan said, referencing the new "2021 National Champions" signage revealed pregame. "They were fantastic. Not only were they fantastic in number, but they were educated and loud and influenced the game. They were fantastic.

"But not as good as the guy behind me (Noonan pointing to Sylla)."

There was a little too much action for new Clemson goalkeeper Trevor Manion early, where a bad touch on his part in the box freed up Indiana’s Samuel Sarver to steal the ball away and easily score the game’s first goal less than six minutes in.

Manion did recover to make a pair of nice saves to keep the Hoosiers from inflicting further damage in the half. He faced six shots in all in the first 45 minutes.

Clemson answered back with the junior midfielder Sylla, who played through injury last season, going to his right and sending a shot across his body to the corner of the net in the 12th minute.

It didn’t take long after that for Clemson to take its first lead with a devastating dribble from senior forward Mohamed Seye, who sent his shot between the legs of an Indiana defender and to the other corner of the net in the 16th minute.

Through 45 minutes, the count was nine Clemson fouls to Indiana’s one called, with all three corners to the Hoosiers.

Indiana’s Ryan Wittenbrink knotted things back up about seven minutes into the second half by both drawing a foul in the box on Clemson’s Ben Erkens and depositing the penalty kick for a goal in the right top corner.

The Hoosiers were right back at it minutes later with a free kick that produced a couple of good chances and another strong Manion save.

Clemson forward and two-time scorer in December’s national championship game Isaiah Reid started to get momentum swinging their way and he fired a shot that was saved by Indiana’s JT Harms in the 63rd minute.

Sylla made a nice move to put another good chance on Harms in the 72nd minute.

Sylla then sent his game-winner past Harms for Clemson’s eighth shot on goal of the game and 14th shot overall.

"Before I came in the second half, coach told me to just shoot the ball," Sylla said. "That's what I was thinking and I got the angle and it went in."

Noonan said the success was deserved after the work that Sylla put in.

"I felt for Sylla last year because he was hurting all year," Noonan said. "He played through the pain and had a fantastic summer and obviously he's electric."

After a corner kick, Indiana had its next best chance along the ground that Manion was able to wrangle with three minutes left.

"Credit to Indiana. That's a tough program. They're one of the best in the country," Noonan said. "I think the Riggs' faithful were really helpful in that regard. They gave us the energy we needed and we found the game in the end. Great teams do that. Great teams come back from being down, resilient and tough and find a way in the last 10 minutes of the game."

The two programs came in with a combined 11 national titles – Clemson capturing its third last season. Both are also in NCAA men’s soccer’s top-10 all-time in winning percentage.

Clemson returns to action on Monday at home versus USC Upstate (7 p.m.).