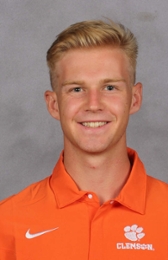 Forward
B I O
Before Clemson: A native of Charlotte, N.C., Kelly was named the ECNL Mid Atlantic Conference player of the year, as well as an ECNL All-American. He played as a member of Charlotte Soccer Academy alongside Tyler Trimnal, and will join current Tiger and former teammate Dawson Malcolm at Clemson.
Noonan on Kelly… “Probably the most athletically gifted of our signees. Has a great nose for the goal and can make something from nothing.”